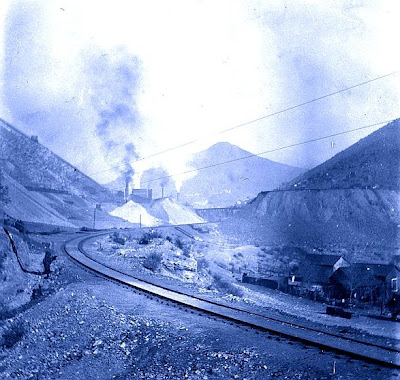 Early Bisbee residents choked on fumes from the mining operations, especially the Copper Queen smelter seen in this view from near Sacramento Hill looking west about 1903. But as long as the smoke kept billowing the paychecks kept coming. Smelting operations moved to Douglas shortly after this photo was taken, though a concentrator plant still operated at Bisbee.

“Junipers and oaks of some size were formerly abundant. . . . But with the demand for firewood these have disappeared. Such trees as still grow on some of the northern hill slopes are little more than bushes. Prior to 1893 oak trees stood in the streets of Bisbee, and the neighboring hill slopes were dotted with shrubs. But this vegetation was destroyed soon after the introduction of the matte process in the Copper Queen smelter with its attendant sulphurous fumes.”
-- p.17, Frederick L. Ransome, The Geology and Ore Deposits of the Bisbee Quadrangle, Arizona. (1904) 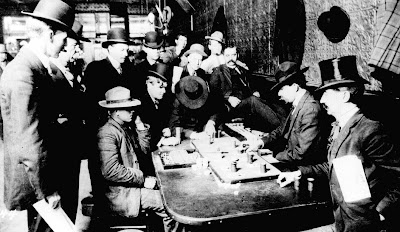 A faro game goes full blast at the Orient Saloon in Bisbee, 1893, captured by noted Tombstone photographer C. S. Fly. Tony Downs, part owner of the saloon, holding a paper with bowler hat and cigar is standing at left. Seated on the left side of the table is the case keeper. On his left hand is a concert hall singer named Doyle, then a man wanted by the police shielding his face under his hat from the camera. At right, in top hat is a gambler named Smiley Lewis, with dealer Johnny Murphy sitting on his right hand, then “the lookout” sitting with legs crossed in a high chair. Among the onlookers were men with names like “Dutch Kid” and “Sleepy Dick.”

All classes of men, miners and businessmen, frequented the more than 40 saloons up Brewery Gulch for gambling, drinking, and prostitution. The tense atmosphere of the faro table drew a crowd wherever gold, silver or copper brought wealth. In fact this photo from the National Archives and Records Administration was reproduced frequently over the years, often erroneously captioned with a Virginia City Nevada location. In 1907, efforts to bring respectability and hasten statehood, led authorities to outlaw gambling, and prohibit women working in saloons which put the damper on prostitution. Prohibition of alcohol came to Arizona in 1919, turning one Bisbee saloon into an ice cream parlor. 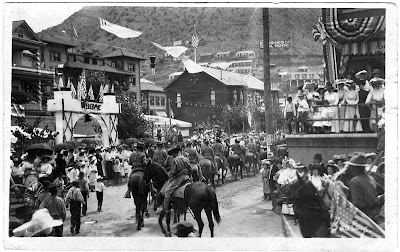 Arizona cities wholeheartedly celebrate holidays. This postcard mailed in July 1909 seems to show the Independence Day parade on Main Street in front of the Copper Queen Hotel and Phelps Dodge mine office as an occasion to welcome a contingent of cavalry, possibly to nearby Ft. Huachuca. In mining towns like Bisbee, hand drilling contests also drew large crowds.

In some ways the automobile had less impact in Bisbee because much of the town is inaccessible by car. Still, by the time this photo was snapped around 1936, residents could motor up Tombstone Canyon for a late night hamburger and Coca-Cola at the Big Meal Drive Inn.
Posted by Robert Lucas at 5:59 PM