Bisbee, “Queen of the Copper Camps,” and “Little San Francisco.”

Following early exploration by Hugh Jones, Cavalry Sgt. Jack Dunn discovered rich outcroppings of copper ore in the Mule Mountains in 1877. George Warren followed up to create the Warren Mining District and the Copper Queen mine. The town was named after a San Francisco investor who never saw the place. Two events soon stimulated economic development in southern Arizona. By 1880, the Southern Pacific railroad had completed its line from Yuma into New Mexico. The following year, Thomas Edison opened the first electric generating plant in New York City giving birth to a new age of electricity, dependent upon copper conductors.

With the arrival of the railroad mining began in earnest and the town of Bisbee grew to serve the industry. Rails reached Bisbee in 1889. Water came from a well at Naco. A second railway from El Paso came in 1902. James Douglas and his Phelps Dodge company purchased an interest in the Copper Queen mine in 1881. The other large mine was the Calumet and Arizona.
[click on a picture to see full size; right-click to save] 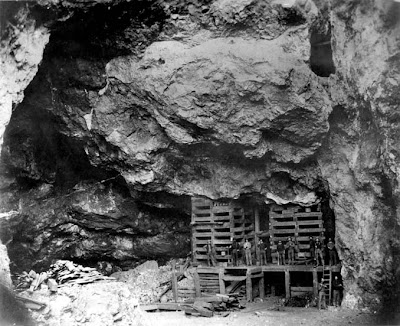 At least two of the hills surrounding Bisbee contained massive ore bodies, the removal of which left underground caverns with cathedral ceilings called “stopes.” Timber cribbing was used to support overhead rock. Tunnels in the Copper Queen mine led to particularly large stopes like this one pictured in the 1880s. Because one caption calls this photo “first ore,” it may show the “glory hole” in the side of Queen Hill where digging first began. The hole was open to the air at the top and proceeded down into the hill for more than 300 feet. After 1910, new ways of moving massive amounts of soil learned in Panama and Jerome, Arizona, led to the development of open pit mining.

Mining provided jobs and miners required a service industry. The population of Bisbee soared. The 1890 census of 1,535 residents made Bisbee the fifth largest city in the territory behind Tucson, Phoenix, Yuma and Prescott. By 1900, some estimates pointed to 24,000 inhabitants living in the Mule Mountains. Bisbee was said to be the largest city between St. Louis and San Francisco, certainly between Los Angeles and El Paso. Detail from a geology map prepared by Ransome (1904, op. cit.) shows the City of Bisbee surrounded by hills (shown with contours) and mines (tunnels in blue). The black rectangles are buildings and houses. Colors show geologic formations.

The company store and library, fine hotels, churches, fraternal orders and the Bank of Bisbee clustered around a square at one end of Main Street. The other end of the street wound around Castle Rock past the rich homes on Quality Hill and up Tombstone Canyon. There were impressive schools and two large hospitals. One source says Bisbee had the first community library, baseball fields and golf course in the state. Large YMCA and YWCA recreational facilities downtown were somewhat affectionately called “welfare factories,” because they showed a progressive concern for employees on the part of mining companies. Less progressive amenities were also common. The narrow way called Brewery Gulch was lined with saloons and bordellos euphemistically called “cribs.” Built on the side of Quality Hill near the entrance to Tombstone Canyon in 1931, the Art Deco halls of the Cochise County Court House are now said to be haunted by a former judge. Tombstone was county seat until 1929. Courthouse Triangle is flanked on one side by St. Patrick’s Catholic Church (1916) and on the other side by Horace Mann School (1917). At the point of the triangle stands the miner’s monument, a copper-gilded statue of a worker holding a hammer and chisel erected in 1935.

Wherever men and women worked hard for a living in dangerous conditions, owing their soul to the company store, they demanded progress. They dreamed life would get better in coming years for themselves and their children. But Bisbee would always be at the mercy of fluctuating market prices for copper.

By April 1881, the Copper Queen mine had shipped 112 tons of pure copper by mule team wagons to the railhead at Benson then sold the operation for $1.2 million. But every year huge new “lenses” of copper ore were discovered in the surrounding hills. By 1904, the Bisbee mines had produced 400 million pounds of copper, then another 1.5 billion pounds from 1909 to 1918. One mine, the Irish Mag, would eventually return $15 million to investors. By the time the Lavender Pit played out in 1974, the Queen of the Copper Camps had earned at least $2 billion from more than 8 billion pounds of copper. Add to that nearly four million pounds apiece of lead and zinc, 2.7 million ounces of gold and a million ounces of silver.

When high market prices for copper inflated profits, workers wanted their share or went on strike. The demand for copper during World War I, strong demands by the federal government for patriotic support of the war on the part of all Americans and the radical Industrial Workers of the World union clashed to blow the lid off Bisbee in 1917. With the backing of the county sheriff’s office and the president of Phelps Dodge an angry mob rounded up everyone suspected of supporting the I.W.W., marched them to railroad cattle cars and forcibly deported 1,286 to New Mexico. 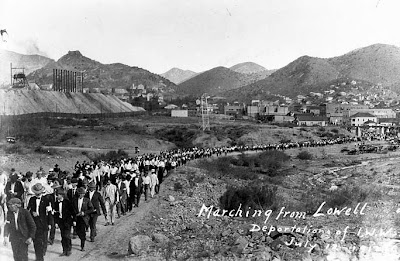 Rounded up by a mob wielding guns, axe handles and sticks, IWW “sympathizers” are marched from Bisbee and Lowell to the ball park at Warren July 12, 1917. Deportees were marched between two lines of armed men, some of whom wear white arm bands to show they are deputized. Behind the marchers, on the left, is the Calumet & Arizona Junction Mine, with Lowell’s Main Street on the right.

When the war ended the price of copper plunged. It had already fallen from 20 cents a pound to 13 cents during the recession of 1907-1909. It was back up to 27 cents in 1916, then fell to 18.6 cents following the armistice and 12 cents in 1921. Unemployment in Bisbee was sporadic, but nothing like what was to come. After the stock market crash of 1929, the price of copper declined 70%. The Sacramento Pit fell silent, Calumet & Arizona merged with Phelps Dodge and one of the smelters in Douglas closed. Phelps Dodge mines at Ajo and Morenci ceased operations in 1932. Only the coming of another world war in 1939 returned miners to work.

Government intervention to stabilize copper prices and sustained economic growth around the world kept many families employed through the 1950s and 60s. Then, the market forces of globalization came into play, along with new demands for profit from investors. Copper mining in Arizona shifted to more profitable locations in Pinal, Pima, Greenlee and Gila counties. Bisbee’s Lavender Pit closed in December 1974 and Copper Queen underground operations ceased six months later. Like Ajo, Bisbee survived as an art and retirement community and has retained the county seat.