[click on an image to view full size; right-click to save; use back button to return to blog] This postcard view from about 1918 looks east over downtown. Chihuahua Hill is on the left, Queen Hill on the right. Between the two, steam shovels have recently begun cutting copper ore out of Sacramento Hill, most of which would become inverted as the Sacramento Pit. Nearby, aggressive digging after World War II would create the 1,000-foot deep Harry Lavender open pit. An earlier “glory hole” is visible in Queen Hill.

Bisbee built itself in the dry gulches between a collection of hills in the Mule Mountains. At the bottom, stores lined narrow winding streets like Brewery Gulch, streets that flowed with water following each summer storm. Miner’s shacks and family homes hung from Castle Rock or climbed Young Blood Hill and at least half a dozen other steep slopes. Mine shafts, shops and smelters were propped up against Queen Hill and Sacramento Hill. There was no planned development, no zoning rules. Land had value according to mineral content or gradient. Wage earners had to climb long flights of stairs to get home. Some residents were impressed by the jumble as a “bit of Switzerland in America,” while others saw only a “city of sighs and tears,” or “signs and beers.” A devastating fire in 1908 wiped out the downtown, but substantially constructed masonry buildings followed and most of those survive today. 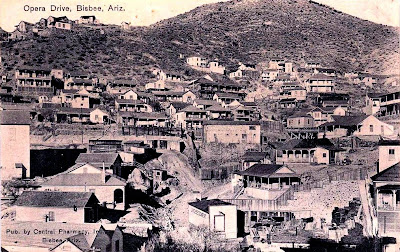 Opera Drive heads north up Opera Hill from a point behind the Copper Queen Hotel downtown. This view of the neighborhood from about 1907 shows the kind of mixed development that characterized Arizona mining towns. Notice the lumber yard at lower right, and farther up the hill the Buxton Smith Company (coal & wood fuel sales). Stimulated by changes in postal regulations and new color printing techniques in 1898, postcards became tremendously popular items sold in drug stores, curio shops and “five and dime” stores. This postcard, like many before 1910, was printed in Germany. Originally in black and white, I have added a tint. 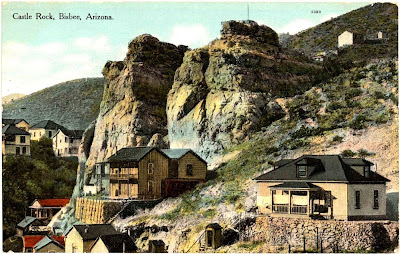 A scene of middle-class prosperity beneath the twin turrets of Castle Rock about 1907. The sky is blue this day (thanks to color printing on the original postcard) and the air is clear. Sheets are hung out to dry on a southwest facing porch, There’s the outhouse conveniently located along the stairs. Below this scene runs Main Street, winding around the rock to enter Tombstone Canyon. But everything had to be hauled up the stairs, water, groceries, furniture, and the building materials to construct these homes. In many areas of town burros could bring supplies, and the valuable animals had a large population in old Bisbee. The two big houses pictured are still there.
Posted by Robert Lucas at 10:01 AM