Will the Arizona Centennial Be the Last?

At this point, 2012 seems an inauspicious year for celebration. First, Arizona is suffering the worst economic depression since the 1930s. Where will the money come from for a huge birthday bash? The Associate Press reported in May that fundraising for the centennial celebration was at a standstill and there would be almost no funds for celebration in next year’s state budget. Will there be more money in 2011, or 2012? After electronics and housing have gone bust, what will be the next big thing bringing prosperity to the state?

And then, haven’t you heard? The world will end on December 21, 2012 according to the Mayan Long Count Calendar. Of course, others say its just a publicity stunt to make millions for Hollywood, that the Mayans who still live by the old calendar will simply start counting the days over again in 2013, sort of like the Europeans did in the year one. After all, we did survive Y2K. But just remember, we have been warned.
[click on a picture to see full size; right-click to save] 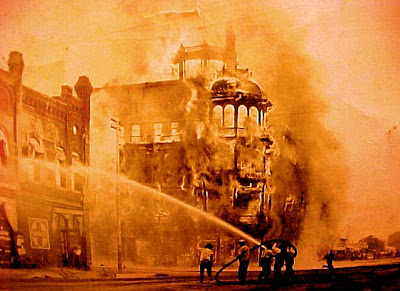 The Adams Hotel, largest and finest in the valley at the time, burned to the ground in 1910. Located at Central and Adams Street in Phoenix, it was built of brick with spacious wooden sleeping porches all around. It wasn’t an apocalypse, however, all the hotel staff and guests managed to escape with their lives. Rebuilt in poured concrete, the second Adams Hotel survived until demolished in 1973. Now the Crown Plaza occupies the site. The fire hose in the picture is trained on the Gooding Building across the street to protect it from exposure to the heat.

While mourning the dead, after clearing away the wreckage, life went on following some horrendous disasters in Arizona’s past. Hundreds of Navajo residents of Arizona died during the Long Walk to New Mexico and back in 1864-1868. For about a hundred innocent Aravaipa Apaches, mostly women and children, the world ended April 28, 1871 in the Camp Grant Massacre. Those disasters were not accidental.

Probably the first mass casualty disaster in Arizona history took place when the flood-swollen Hassayampa River overtopped Walnut Grove dam at 1:30 a.m., February 22, 1890, causing the 110 foot high rockfill structure to crumble. A lake of 50,000 acre-feet, one of the largest volumes of water ever released by a dam failure in the US, rushed downstream 31 miles to Wickenburg. The resulting apocalypse swept away to their deaths between 70 and 100 residents living along those miles. 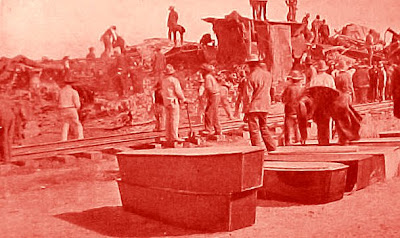 Coffins are stacked nearby as volunteers search for bodies in the burned wreckage of two Southern Pacific passenger trains that collided on the single track southeast of Tucson in 1903. A temporary passing track (in the foreground) to bring help trains had been constructed the same afternoon.(photo from Leslie’s Weekly February 26, 1903)

Several train wrecks in Arizona over the years have been accompanied by loss of life. On the night of January 28, 1903 two passenger trains collided head-on near Esmond siding 14 miles east of Tucson. Much of the wreckage caught fire and burned, killing more than 20 passengers and crew.

When two airliners collided over the Grand Canyon in 1956, they didn’t meet head-on as our graphic implies. They were both flying west-to-east and came together at an oblique angle in each other’s blind spots.

Probably the greatest loss of life in a single accident in Arizona occurred June 30, 1956 when two of the largest and fastest prop liners collided over the Grand Canyon. The TWA Super Constellation and United Air Lines DC-7 both left LAX that morning within three minutes of each other, headed respectively to Kansas City and Chicago. Their planned routes crossed with 2,000 feet of vertical separation over the Painted Desert. Instead, the TWA pilot requested approval to fly over thunderclouds, putting the Constellation at the same altitude as the United plane. Initially denied permission by air traffic controllers, the TWA flight was then allowed to fly above the thunderstorm keeping watch for the other plane.

The United pilot didn’t see the Constellation coming up from below and the TWA pilot could not see the DC-7 approaching from above and behind. All 128 people on both planes died horrible deaths, but not before suffering many long seconds of knowing what was happening to them. The left wingtip of the DC-7 tore off the Constellation’s tail while the propeller blades sliced open the rear fuselage, sending the wreckage four miles straight down into the canyon as blankets and magazines fluttered in the clouds. Damage to the DC-7 denied it enough lift to survive and it quickly lost altitude, smashing straight into a rocky butte just after the pilot radioed a final message.

http://www.aircraftarchaeology.com/twa_united_airlines_grand_canyon.htm description of the crash and photos of recent visit to crash site.

The worst hotel fire in Arizona history was equally horrifying. Shortly after midnight, December 20, 1970, fire broke out in the Pioneer Hotel on Stone Avenue in downtown Tucson. Flames and thick smoke spread rapidly through the top eight floors of the 11-storey building built in 1929, trapping many guests in their rooms. The building survived, twenty-eight guests did not.