U-V-X-Z: The Sad History
of Valentine
This blog has presented histories of Arizona Communities, one for each letter of the alphabet. But few places took names beginning with U, X and Z. “Union” was the first name chosen for the town of Eagar in Apache County, and Lehi, now absorbed by Mesa, was first called Utahville. Zenos was the first designation for Mesa, and there was a ranch community called Zeniff about 25 miles west of Snowflake. Arizona Place Names has no listings beginning with “X” and the USGS Geographic Names Information System gives no populated place beginning with “X.” There are, however, a number of small places, including Vail, Valle, Vekol and Vernon, beginning with “V.” And then, there was Valentine.

Place names are confusing in the Valentine area. When the Atlantic & Pacific railroad built across northern Arizona 1880-1883 it followed the Beale Road of 1857. Beale had traveled a dry wash through a canyon in order to descend the high Grand Wash Cliffs, one of the western stair steps off the Colorado Plateau. He named a spring in the canyon Truxton Spring, using a family name. When the A & P built through the same canyon, railroad workers saw Truxton Wash flowing through two canyons really, the upper, narrow Crozier Canyon and the lower, wider Truxton Canyon. There were three important springs in the area, Crozier Spring to the north, Truxton Spring in the Canyon and Cottonwood Spring to the south. The Cottonwood Cliffs are a southern extension of the Grand Wash Cliffs. In 1883, the A & P put in a large pump and tank fed by Truxton Spring to provide water for thirsty steam engines. 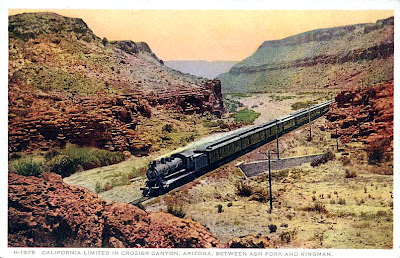 The Fred Harvey Company issued about 1915 this postcard of the Santa Fe Railway (successor to the A & P) passenger train called The California Limited in Crozier Canyon. The route offered a convenient grade but was subject to washouts when the normally dry stream would suddenly become a tremendous rushing torrent thirty feet deep. The tracks had to be relocated to slightly higher ground after a 1904 flood. The line was double-tracked through the canyon 1922-1923 and is still in use. This “Phostint” card by Detroit Publishing Company relates: “In this canyon is a U. S. Government Indian school, where the Hualapai and Havasupai Indians are made over into educated citizens.” The school was not located in the canyon depicted, but at least five miles downstream. The Massachusetts Indian Association founded Hackberry Day School in 1894 on the railroad along Truxton Wash. Hualapai families had objected to sending their children far away for education, especially after two students died at Albuquerque. The day school soon moved four miles east of Hackberry, to the George Aitken (1844-1912) ranch on the railroad, where President McKinley established the Hualapai Indian School Reserve in 1898. There, the federal government established Truxton Canyon Indian School in 1901, in a small valley on the west side of the railroad. This is a picture of the brick dormitory as seen from the tracks before 1912. Sleeping porches for health and comfort were added in 1912 at each end of the building since there was no air conditioning in those days. Students lived at the school September to May, wrestling with disease, culture shock and homesickness. Spanish influenza took the lives of 22 children and adults between October 1918 and January 1919. The school closed in May 1937 and the dorm was demolished in 1960. Its bricks, manufactured on site with Indian labor, were recycled to build the Mohave County Museum of History and Arts in Kingman. 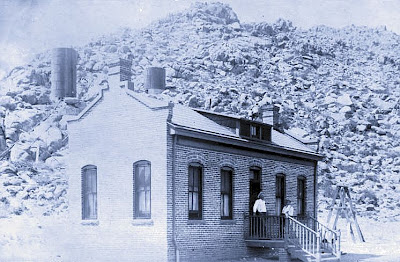 This structure housed the boarding school office and US Post Office. The Post Office was established in 1901 as Truxton. The name was changed in 1910 to Valentine, in honor of Commissioner of Indian Affairs Robert G. Valentine (1872-1916). When the school closed, the post office moved off reservation, two miles away, to the service stop on Route 66. The old post office building is one of the few survivors from school days. The boarded-up classroom is also still there. A short distance away the Truxton Canyon Agency of the US Bureau of Indian Affairs now maintains its offices. Non-Indian children used a nearby wood frame building called the Red Schoolhouse 1924-1969. 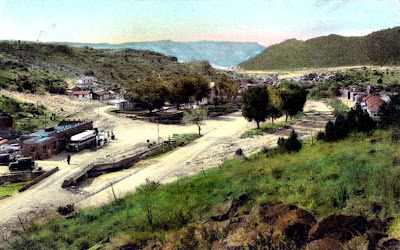 After finding the Hackberry Mine with a partner, Sam Crozier (1840-1901) acquired Crozier Ranch in 1880, established by others in 1872. C. J. Shank leased the property in 1923, built a swimming pool and created a little resort, mostly for well to do families from Kingman. Not long after the National Old Trails Road became US 66 Edward M. Carrow (1876-1945) and his wife Edith opened a tourist camp at the ranch. The facilities shown here were located along the highway about a half-mile east (the highway actually runs north at that point) of Crozier station on the railroad. This hand-colored Albertype view, looking south, shows the Carrows’ 7-V Ranch Resort (or 7-V Bar, see map below) about 1934. A cross-country bus has stopped at the café and filling station just off the dirt road that was Route 66 back then. Most of the resort and swimming pool, are in the trees (cabins at right). Truxton Canyon is in the distance. Carrow was a cattle rancher, in partnership with his brother Murray and then with I. M. George of Kingman for a time. The normally dry wash from Crozier Spring would sometimes flood, stopping traffic on the highway, despite the bridge visible at lower left. In 1936 the Arizona highway department relocated Route 66 to higher ground out of view at right and the Carrows’ business was ruined. They were compensated by the taxpayers (see 1941 court case “State v. Carrow” Vol. 57 Arizona Reports pp. 436ff.) and the site reportedly provided housing for railroad workers by the 1940s. Others purchased the Crozier cattle ranch and tried to keep it open for tourists until the 1990s.

Section points on the railroad west of Peach Springs in 1921 were named Cherokee, Truxton, Crozier, Valentine and Hackberry. Cherokee Point, on the mountains southwest of Peach Springs, probably gave its name to the section point on the railroad. Crozier was named for cattleman and state legislator Sam Crozier. The Hackberry Mine, named for a large hackberry tree, was located around 1875 in the hills south of the railroad. Truxton Spring gave its name to a point on the railroad, the Indian school, and later, a service stop on Route 66 six miles east of Valentine. In the 1880s, Truxton on the railroad may have been located at the point now called Crozier, but when the place name “Crozier” shows up on rail maps, “Truxton” is then applied to a siding at the eastern entrance to Crozier Canyon, where it remains today. In 1951, two men located a café and gas station on Route 66 between Crozier and Peach Springs, naming the stopping place Truxton because the siding was the closest point on the railroad. Named points on the railroad were placed where section maintenance gangs lived or stored tools, or where passenger stations, passing and parking sidings or cattle loading sidings were located.

The Automobile club of Southern California 1932 guidebook to Route 66 maps the area around Valentine. The location of the future Valentine service stop on the highway is identified as “Oasis,” watered by a nearby spring. Later there would be an “Oasis Store” at Valentine. The only Valentine on this map, however, is Valentine siding on the railroad. Notice how the dirt road that was US 66 crossed under the railroad at Crozier by following a side drainage under a bridge and then returned to the west side of the tracks via another underpass before the school. Route 66 was a slow and winding road back then, subject to closure during flood or heavy snowfall. By making deep grade cuts, the highway was straightened 1936-37 to avoid flooding and no longer crossed under the tracks. In 1937, the route through Truxton Canyon was the last section across Arizona to be paved. At the same time the government school closed and Oasis became the new location for the Valentine post office. 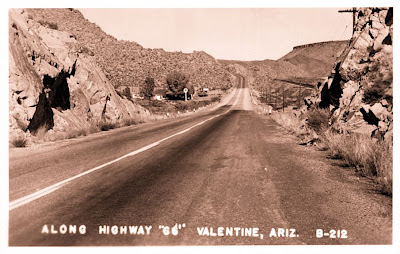 The service stop of Valentine was built on private land about a mile west on Route 66 (actually south at this point) from the Crozier depot. You can see the Santa Fe tracks at right and a Texaco station on the west side of the highway (view is to NNE). In addition to cabins for spending the night, for a time there was also a small store. It was called Oasis Store when operated by Mr. & Mrs. William Scaggs in the 1950s. The school was located almost two miles west of here on the highway.

At some point, the Valentine post office began re-mailing holiday cards for postal customers, applying a unique heart-shaped cancel to the stamp. Soon, bundles of valentines from all across the country would arrive at the remote post office, spreading fame for the Arizona place name. For a time, Valentine, Arizona became associated with happy thoughts. Traffic on Route 66 increased every year after World War II until the new Interstate-40 freeway bypassed 159 miles of Route 66 from Ash Fork to Kingman. The freeway bypass opened 22 September 1978, leading to the immediate decline of business along the old alignment of Route 66. US Highway 66 was decommissioned as a federal highway in 1985. In 1990, Congress began the process to designate Route 66 remnants part of a historical transportation corridor with US Park Service interpretation. In August of that same year, a man robbed the Valentine Post Office and murdered Postmaster Jacqueline Ann Grigg. The post office and Union 76 station closed, located at that time at least three miles west of the old Oasis site according to one source, close to Valentine siding on the railroad.

On to histories of Winslow and Yuma, and then attention will be given to some of those communities passed over in the alphabet, like Prescott and Tombstone.