Arizona Once Revered the Swastika

Eighty years ago you saw it everywhere in Arizona. That strange symbol, once venerated, now hated, but always misunderstood. Every Arizona Highway route marker used to carry the swastika emblazoned on an Indian arrowhead. As a kind of talisman, the swastika marked the location of trading posts and shops selling Native American art, and it was a common element of the designs woven into Navajo blankets and Pima baskets. The white man recognized it from the old country and molded it into concrete and plaster where it survives to this day. Back then it was a happy symbol of kind thoughts and good luck for the traveler, not the symbol of hate that brought holocaust to Europe. But now, it’s hard to even look at a swastika, let alone discuss its history in Arizona.

What is that swastika doing on Arizona highway signs? When highways had names, before they were numbered by the federal government in 1926, major routes were marked for motorists by signs with the name or initials and bands of color distinctive to each route. Numbered route markers like we see today replaced these older signs beginning in 1926. Arizona adopted a state boundaries shape with a swastika superimposed on an Indian arrowhead. It symbolized good luck for the traveler. The route marker in center is from a 1926 Rand McNally roadmap of Arizona and New Mexico. The map gave both names and numbers for main highways. The State Route 85 sign at left is from this period 1926-1935 when the number appeared in white on a black band across the shield. In this case white reflectors aid visibility at night. Black numbers alone replaced the black band later in the 1940s. Amazingly, through the war years of 1942 and 1943 an Arizona highway map was on the back cover of the official state magazine, Arizona Highways, every month, showing the state route marker with black band and swastika. 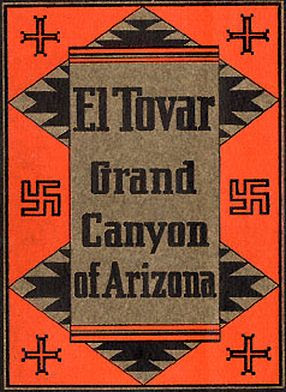 The cover of a brochure advertising the Fred Harvey El Tovar hotel at the Grand Canyon about 1908 was decorated with a Navajo blanket design featuring Greek crosses and swastikas. Nearly every Fred Harvey establishment in the southwest had an “Indian room” with displays of Native American art for sale. 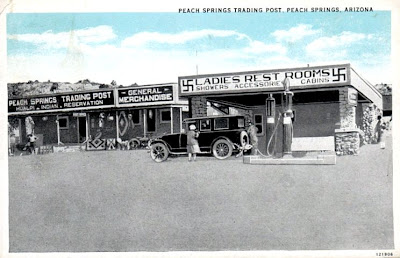 Traveling the National Old Trails highway across northern Arizona in the 1920s meant splattering mud everywhere or kicking up clouds of dust as you bounced over rocks and into ruts. A most welcome sign upon reaching Peach Springs was the promise of “Ladies Rest Rooms” and the good luck/flying feet swastika (see symbolism below). White-border postcard published by D. T. Mallonee of Phoenix for Peach Springs Trading Post and mailed in 1928.

Long before Hitler appropriated the swastika cultures around the world had used and named the design.

swastika - from the Sanskrit word for “well being,” a lucky symbol or omen of good fortune in the Hindu and Jain religions of India, it was often identified with the Sun-Wheel image.

cross cramponnee - An English heraldic term from the French and German languages meaning a cross with a cramp (bend or hook) at each end.

fylfot - supposedly from the Anglo-Saxon language for “four feet,” a heraldic and religious symbol used as a secret emblem or ornament. There is disagreement on the origin of the word, but the fylfot cross came to suggest flying feet or speed of travel.

gammadion - a cross of four capital gammas based on the Greek cross, popular in the Byzantine church.

hakaristi - a word in the Finnish language meaning “hook-cross” and applied to the symbol used by the Finnish air force 1918-1944. The symbol was used by several military aviators on their planes during the First World War and was the personal symbol of the pilot who helped create the Finnish air force. After a Soviet invasion of Finland the country was allied with Nazi Germany for a time during the Second World War.

Hakenkreuz - the German term for the symbol, which translates “hooked cross” from the word for hook or axe.

whirling logs - a term used by Navajo artists and medicine men to explain the design used in sand paintings and rug weaving (see below). 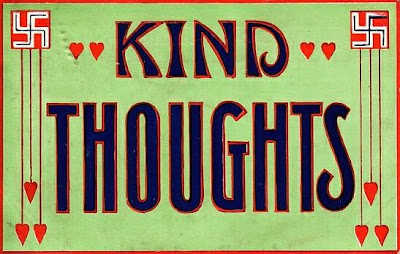 Around 1910 when this postcard was made the swastika was associated with kind thoughts. It was a trademark of several companies around the world and sometimes used on jerseys and ball caps for athletic teams. 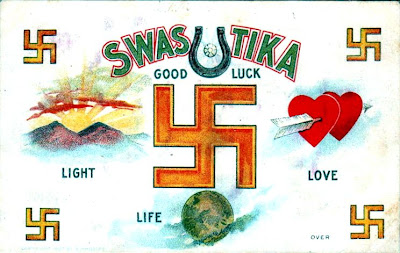 Good luck was the most common idea attached to the swastika around 1907 when this postcard was made. “The swastika is the oldest cross and emblem in the world,” explained the back of this card. “It forms a combination of four ‘L’s’ standing for Luck, Light, Love and Life.”

The simplest explanation for the origin of the swastika in so many distant cultures around the world is that it is so simple a design, based on the simple “X” or cross, that humans couldn’t help but invent it to describe the human experience of the four directions on earth. When we stand outside, we naturally face some direction, with another at our back and two more at our arms. But mystically minded Europeans, who ascribe to a secret doctrine or Hermetic type philosophy see much more in the swastika. Joseph Campbell (The Masks of God, 1959) saw the swastika as a whirling image. Some believe the whirling swastika is a representation of the rotating star field visible at night, and by inference the rotating earth. A mechanism well known to the ancients. Frank Russell (The Pima Indians, 1908) thought the “ogee swastika” design in Pima baskets was a whirling or whorl design developed from the fret ornament. In any case, Europeans were very impressed to see swastikas in Native art. Around the beginning of the last century, the swastika became a very common symbol. In Indian Territory (Oklahoma) the National Guard used the swastika as a left shoulder patch for 15 years. In Arizona, the swastika persisted even after the Nazi party came to power in Germany (1933) and only disappeared after the Second World War began. Today, it survives in cast concrete bridges and irrigation gates at Laguna Dam (1909) near Yuma. In Phoenix, the Arizona Department of Agriculture building (1930), 1688 West Adams, includes swastikas as a decorative element. 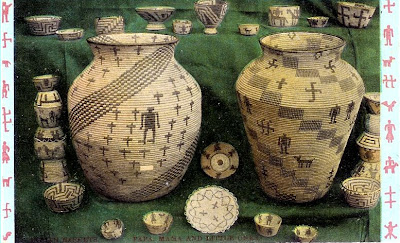 This collection of Pima baskets from around 1909 illustrates various design elements, including the Latin cross, swastika and double swastika. Note that the proportions of the swastikas do not conform to the European design. But the man riding a horse could only have been used after European contact. 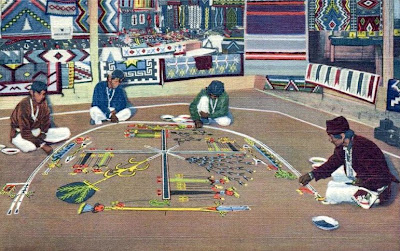 Navajo medicine men create the whirling logs design in colored sand for the tourists. A smaller sand painting is one of the elements of a healing ceremony. Symbolism communicates the sacredness of the four directions and their relation to the harmony of nature. The usual practice is to depict the four directions and the four sacred plants, all encircled by the rainbow goddess with an opening remaining toward the east. Here, they haven’t yet trickled sand to draw the fourth plant. 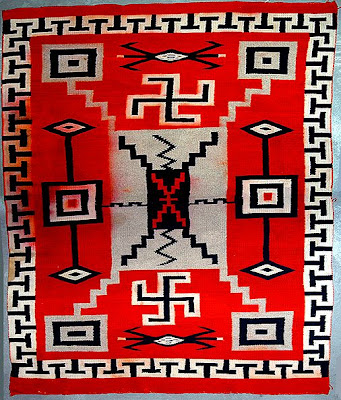 By 1896, the swastika appeared in Navajo weaving. This blanket dates to 1920 from Chinle. Called a storm pattern, it includes a fret border and both left and right facing swastikas. Navajo artists probably adopted the swastika after Europeans said they saw that design in the sand paintings. (National Park Service photo) 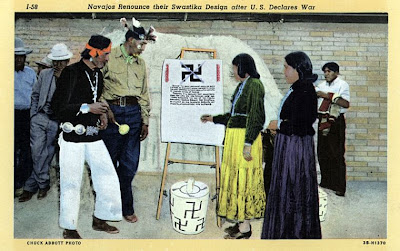 With the beginning of World War Two Navajo and other tribes in Arizona staged public renunciation ceremonies, signing a pledge not to use the swastika in their art. This Curt Teich postcard was published in 1943.
See:
Arizona Capitol Times, “Symbol Of Hate Or Whirling Logs?” February 21, 2003
Laura Gilpin, The Enduring Navajo (1968) swastika not mentioned but sand painting symbolism is explained.
Life magazine, May 20, 1940, p.118, Arizona road signs stir controversy.
Thomas Wilson, history of swastika, pp.757-1030, Report of the National Museum (1894)
http://www.arizonaroads.com/ (pictures of highway route markers)
Posted by Robert Lucas at 6:36 PM