Indian Hot Springs Was Really Hot
Among the hot spring resorts of Arizona, Indian Hot Springs on the north side of the Gila River five miles north of Pima in the wide Gila Valley of Graham County, has always been a popular destination. As the name implies, the steaming waters with curative powers had long been open to free access by indigenous families. But when those families were confined to reservations in the 1870s, that opened the springs to commercial development. Ben Gardner channeled the flow and diverted water into pools soon after Ft. Thomas was established by the military about six miles west in 1876. From then on the hot springs were sold as commercial property every few years or so and each successive owner added improvements.

The Honeymoon Trail from Utah brought Mormon families to the Gila Valley, some of whom formed the town of Eden in 1880 two and a half miles south of the hot springs. By the end of the 1890s, the Gila Valley, Globe and Northern Railway had been built along the Gila River, providing convenient transportation to Indian Hot Springs from the depot at Pima. In 1903 construction was completed on a three-story hotel at the hot springs described by one visitor as “a feudal castle lost in the desert.” In 1905, the largest swimming pool in Arizona, measuring 255 by 70 feet, was added and then enlarged to 270 feet and cemented after 1916. 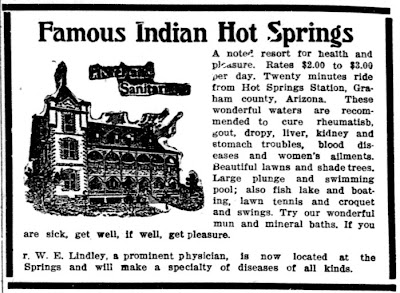 This advertisement appeared in the Bisbee Daily Review August 31, 1910, with a drawing of the “hotel and sanitarium.” At that time Bisbee residents could easily reach the hot springs by rail. (Click on pictures to see full size) There are a lot of typos in the text. “Dropsy” is the archaic term for general edema, usually from a weak heart. Notice promotion of the dual role of health or pleasure.

Indian Hot Springs was now a therapeutic and recreational site for those who could pay admission. By 1912 that included local families with modest incomes, along with those who could afford to take the train or drive their automobile. The resort was only a short distance off the major cross-country highway, US 70. “The famous health and pleasure resort” advertised its 1.5 million gallons of daily flow into pools, tubs and mud baths as a cure for rheumatism. There were four water temperatures available, Magnesium Springs at 81 degrees, Iron and Mud Springs at 116 degrees, Rock Springs at 118 and Beauty Springs one degree hotter. (For more supposed health benefits see: Resources of Graham County compiled by J. H. Vaughn (1888) pp. 15-16.) 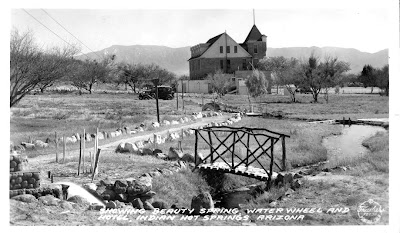 Burton Frasher (1888-1955), who operated a postcard business headquartered in Pomona California, published a series of “real photo” cards of Indian Hot Springs in 1936. The photographs appear to have been taken a few years earlier. Fortunately the Frasher family and the Pomona Public Library have made hundreds of “Frashers Fotos” public domain images available on the internet. The amazingly sharp and beautiful black and white photos clearly document much of Arizona from 1930 to 1955. 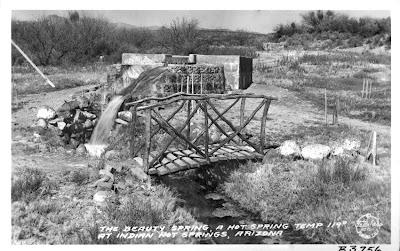 I haven’t been to the site, and I’m not sure where you would actually immerse yourself in the hot water or have a mud bath. Probably inside, though the hot springs I’ve visited always had outdoor pools. Three “Roman baths” were built at the site in 1903. A big part of the experience is the mental relaxation. There was a resurgence of the hot springs spirit in the hippie movement of the sixties and that was evident at Indian Hot Springs too. 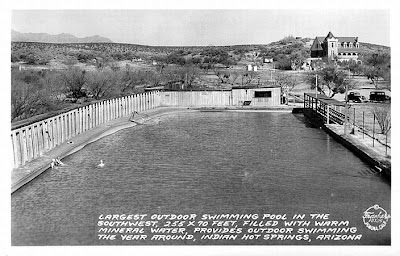 Frasher gives the older dimensions for the biggest swimming pool in the southwest. Local sources say it was enlarged to 270 feet long shortly after 1916. 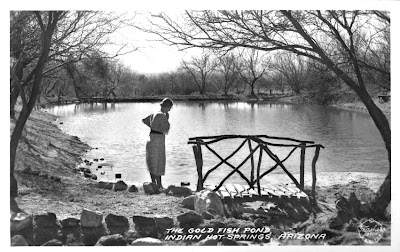 In the early days this pond offered romantic rowboat outings. Apparently it was stocked with goldfish when this photo was snapped. The Arizona Bureau of Geology and Mineral Technology has identified 45 hot and warm springs in Arizona, with a concentration in Graham and Greenlee counties. (James C. Witcher, “Thermal Springs of Arizona,” Field Notes, June 1981).

The hot spring experience was mostly a Native American and European tradition. What we call a spa today is an entirely different affair. By the 1960s, business at Indian Hot Springs had declined and the latest owners of the property were more interested in farming the acreage. Without commercial value, the beautiful grounds were opened up again for free use by local families. But much would be lost. Around 1966 the health department closed the pool, judging that un-chlorinated water was not fit for swimming. Now the ornate Victorian hotel was even more out of place. When built, the brick and stone building had been advertised as fireproof, but fire of unknown origin broke out in the wooden interior February 24, 2008, completely wrecking the entire structure. 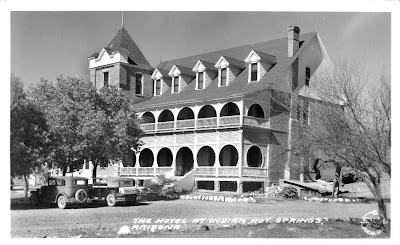 This fine structure replaced canvas “cottage tents,” an adobe building and a small wood house available for up to 60 guests before 1903. By 2008 the 30-room hotel was still being rented to guests, according to a newspaper account, and caught fire after a group left.