Chandler: “A Modern Eden,” “The Five Star City,” and a “High Tech Oasis in the Silicon Desert.”

In addition to mineral riches, Arizona has produced great wealth through land development and agriculture. Inspired by the ancient tradition of an Eden-like oasis in the forbidding desert, Arizona developers have created a number of planned communities over the years, each with its unique center-piece drawing shoppers to landscaped arcades and homebuyers to pleasant abodes set in a fabulous dreamscape.

Dr. A. J. Chandler (1859-1950), a Canadian veterinarian recruited to head Arizona’s first Livestock Sanitary Board in 1887, was one of those developers. And his Chandler Ranch, subdivided in 1911, became one of those dreamscapes. The real estate office opened in the barren desert south of Tempe May 17, 1912 and sold $50,000 worth of parcels that first day. 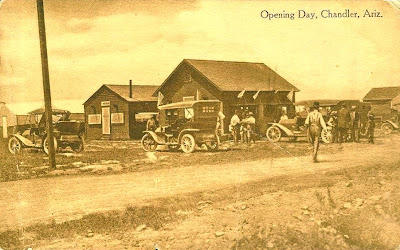 The one square mile townsite centered around a landscaped park just below the intersection of Arizona Avenue and Chandler Blvd. (Cleveland street at the time). And within a year a world class desert winter resort in the popular Mission Revival style opened on the west side of the park. Called the San Marcos, it was the first cast-in-place reinforced concrete structure in Arizona. The remaining sides of the town square were fronted by business blocks tied together by a continuous colonnade that shaded sidewalks. 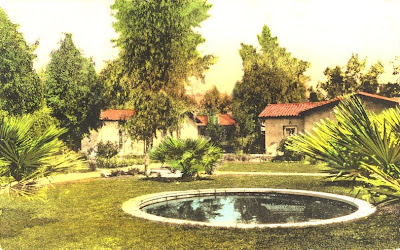 Designed by California architect Arthur Burnett Benton, the San Marcos offered guests a number of detached bungalows west of the main hotel set in a paradise of fountains, pools, flower beds, palm-lined walks and fragrant citrus trees. This view of bungalows is from a penny postcard colorized by the Albertype process about 1915. Remodeled in 1954 and then restored in 1986, the Crowne Plaza San Marcos Golf Resort remains the centerpiece of the historic district.

By 1914 there were 40 businesses serving a population of at least 1,000. The Basha family opened its first store close by in 1920. But agriculture was the foundation of the economy in those days. With irrigation, farmers grew fruit, vegetables and alfalfa. An Ostrich farm, providing feathers for ladies hats, boomed until styles changed in the 1920s. The Goodyear Tire and Rubber Company leased land a few miles south to grow the new variety of Egyptian long staple cotton used in auto and truck tire cords and fabric covering of airplanes. There was a small community named Goodyear located at the present day intersection of Alma School and Ocotillo Roads. The community was renamed Ocotillo just before World War Two when the rubber company created a new Goodyear to serve a naval air field at Litchfield Park. 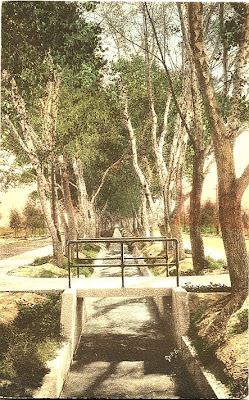 Dr. Chandler was an expert on animal nutrition for the Ferry seed company before coming to Arizona. He noticed that the desert in the Salt River Valley bloomed upon the application of water. For his real estate development he organized the Consolidated Canal Company and supported the effort to build Roosevelt Dam as a year-round source of water.

The Chandler Heights Citrus District was established in 1928 fifteen miles southeast. But it was the buildup for war that brought a growth spurt to Chandler. The US Army Air Corps opened Higley Field 10 miles east of Chandler in 1941 to train pilots, renaming it Williams Field the following year. By 1950 the population of Chandler had more than doubled to 3,800, still a small oasis surrounded by irrigated fields and desert. 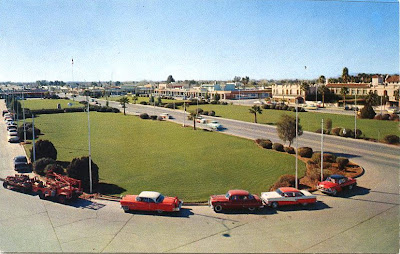 Here’s a bird’s-eye-view of A. J. Chandler park looking southwest in about 1955, published as a postcard by Petley Studios. At right is the front of the San Marcos, with a colonnade front business block in center. After Arizona Avenue became Highway 87 to Tucson, in 1940 the town square was divided in two by a new four-lane highway.

Beginning after the war, the Salt River Valley attracted manufacturing plants, a workforce looking for a comfortable southern California inspired suburban lifestyle and retirees seeking relief from cold Midwestern winters. More recently, aggressive real estate marketing populated Valley cities like Chandler with upwardly mobile dreamers settling under the palms often on the shoreline of a sparkling man-made lake. Chandler gobbled up most of the farms and the desert, passing a population of 100,000 in the 1990s and then 200,000 early in this decade to become the fifth largest city in Arizona. 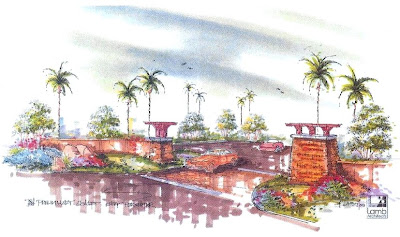 A 2008 entrance design by Lamb Architects for a $3.7 million office condo located at Chandler Blvd. and Kyrene Road in Chandler.
Posted by Robert Lucas at 6:43 PM